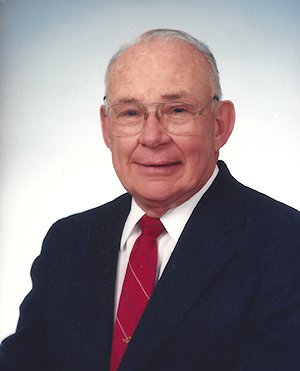 Mr. R. Richard “Dick” Heppe ENG '47 AE passed away from complications of heart disease at his home at The Forum Retirement Community in Cupertino, CA on January 18, 2015.

Dick was born March 4, 1923 in Kansas City, MO to Helen (Gill) and Ralph Heppe.  He moved to San Mateo in 1930 and went on to earn engineering degrees from Stanford University.  He received a Professional Engineer’s degree from Caltech in 1947.

Dick began employment at Lockheed in July of 1947 and retired from the company 41 years later.  He held a variety of positions and was intimately involved in the conceptual design and development of every new airplane produced by the company.  He was proud to complete his career as President of the Lockheed California Company.

Dick married the love of his life, Patricia L. Kennedy, in September of 1947. In their 57 years of marriage, Pat and Dick had 4 children together and lived in La Canada, Pasadena, and Solvang.  Dick later lived at a Senior Community in Cupertino until his death.

In retirement, Dick and Pat enjoyed traveling the world and visiting family.  They also indulged their passion for Napili Kai Resort in Maui, HI, which included Dick’s involvement in management for many years.  Dick also enjoyed woodworking, golfing and stained glass work.

He is survived by children David (Jody), Mark (Tari) and Janice.  Also, by grandchildren Dan (Katie), Amy (Joe) Villacci, Ben (Kelly), Patrick (Sabrina) and Andrew, along with 3 great grandchildren.  Dick was predeceased by his wife, Patricia and his son, Bruce.

A family memorial service will be held in March in Denver, Colorado.

In lieu of flowers, gifts in honor of R. Richard “Dick” Heppe may be made to the Napili Kai Foundation, perpetuating Hawaiian culture through the youth of Maui, or to caltech.edu/give  for the Freshman Summer Research Institute which supports underrepresented students transitioning from high school to research-based education.